I pity the fool who doesn't like to read.

Find me on Litsy as @MarriedtoMrT

A year ago, Reggie’s mother walked out on her family.  Since then, Reggie’s father has buried himself in work and Reggie has taken on the role off cook, cleaner, and mother to her younger brother Henry.  Reggie’s one escape from her new life is her job at a local bookstore that specializes in horror novels.  Reggie loves horror stories.  When unpacking a shipment at work, Reggie comes across a journal of a crazy woman.  The woman tells a tale a frightening tale of entities called Vours.  Vours are attracted by light but feed on fears.  They can enter a body using a person’s fears and take over that body.  They retain the person’s memories and can live as the person they take over but they are not the same.  Reggie thinks she has found a wonderful story but it turns out to be more real than she could ever imagine.  When Reggie’s brother is taken over by a Vour, she is determined to find out how to conquer the Vour and save her brother.

Reaction: What a pleasantly creepy surprise!  A true teen horror a la R. L. Stine or Christopher Pike.  I loved the pacing.  The story flowed well and I thought Reggie’s realization that Vours are real was realistic and accurate.  The creepy parts were REALLY creepy, at least for me, specifically the scenes where Reggie and gang enters the old house in the woods and then when she goes back, BY HER SELF!  It obviously made an impression on me.  If I have a complaint it is that sometimes the voice shifted to Henry or to Reggie’s friend Aaron and I found it a bit awkward.  Overall, a really awesome horror story.  This is the book that broke my several month reading slump.

Next: The Soulstice (The Devouring #2)

Library Loot is a weekly event co-hosted by Eva and Marg that encourages bloggers to share the books they’ve checked out from the library. If you’d like to participate, just write up your post-feel free to steal the button-and link it using the Mr. Linky any time during the week. And of course check out what other participants are getting from their libraries!

So many books, so little reading.  The story of my life for the past three months or so, though now there are even more books it seems!  Anyway, here’s what I’ve been checking out but not reading. :)

I’m currently reading Cybil’s Graphic Novel finalists and have 53 items checked out and 11 items on hold. 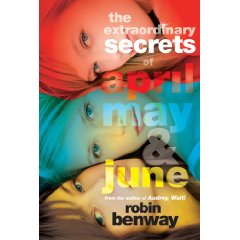 The Extraordinary Secrets of April, May, and June
by Robin Benway

I hugged my sisters and they fit against my sides like two jigsaw pieces that would never fit anywhere else. I couldn’t imagine ever letting them go again, like releasing them would be to surrender the best parts of myself.

Three sisters share a magical, unshakeable bond in this witty high-concept novel from the critically acclaimed author of Audrey, Wait! Around the time of their parents’ divorce, sisters April, May, and June recover special powers from childhood—powers that come in handy navigating the hell that is high school. Powers that help them cope with the hardest year of their lives. But could they have a greater purpose?

April, the oldest and a bit of a worrier, can see the future. Middle-child May can literally disappear. And baby June reads minds—everyone’s but her own. When April gets a vision of disaster, the girls come together to save the day and reconcile their strained family. They realize that no matter what happens, powers or no powers, they’ll always have each other.

Because there’s one thing stronger than magic: sisterhood.

Audrey, Wait is an all-time favorite of mine and I have been just dying for another book by Benway.  And I’ll still be waiting until August 3, 2010…

Waiting on Wednesday is hosted by Jill from Breaking the Spine.  What are you waiting for?

Library Loot is a weekly event co-hosted by Eva and Marg that encourages bloggers to share the books they’ve checked out from the library. If you’d like to participate, just write up your post-feel free to steal the button-and link it using the Mr. Linky any time during the week. And of course check out what other participants are getting from their libraries!

New books have been trickling in and I have been checking them out.  These few are just the beginning of what I can sense will be a crazy checkout spree that will find me setting a new record for the number of books I have checked out on my card.

I’m currently reading The Lonely Hearts Club and have 44 items checked out with 12 (!) more on hold.

Well, I’m a bit behind but that seems to be the story of my life for the past couple of months.  Better late than never, so here they are.

Below is the list of my favorite reads of 2009.  Not all were new to 2009 and some won’t be out until 2010 but I read them this year and they made an impression.  In no particular order, here they are:

Cal Ormund is still recovering from his father’s mysterious death when a crazy man approaches Cal on the street yelling that someone killed Cal’s father and that they are going to kill Cal as well.  The man tells Cal he must lay low and try stay alive until December 31 of the next year, which is when something called the Ormund Singularity runs out.  Cal doesn’t know what to make of this warning.  The man is clearly out of his mind and Cal has never heard of the Ormund Singularity but Cal has always thought there was something suspicious about his father’s death and Cal can’t shake the feeling there was something important his father wanted to tell Cal but was unable to before he died.  Cal sets aside the man’s warning until January 1 when Cal and his uncle are in a horrible boat accident that turns out to be more than an accident but a possible sabotage.  The boat accident is just the beginning of a string of bad luck that begins plaguing Cal and his family.  It’s not long before trouble completely catches up to Cal and he  finds himself on the run from both creepy bad guys and the law.  Cal’s now desperate to solve the mystery locked in the minimal clues his father left behind and find out about the Ormund Singularity.  This is just the beginning of Cal’s long journey and struggle to stay alive.

Reaction: Fun, action-packed adventure but not without flaws.  First, though not necessarily a bad thing, the main character is 15 but the reading and interest level will be for a much younger audience.  The format, written in short snippets of time, plus the reading level will make this one a great pick for reluctant readers.  I was drawn into the intriguing plot from the start.  I want to know:  What really happened to Cal’s dad?  What do the pictures his father left mean?  What is the Ormund Singularity?  Who’s after Cal and why?  And what is up with Cal’s creepy uncle?  Is he friend or foe?  Despite my intrigue, a few things jarred me out of the story.  I found a few plot holes.  The most memorable one, for me at least, was when it was found that, before he died, Cal’s father had drained the bank account from which the mortgage was automatically withdrawn and now they had no money to pay for the house.  I found this odd because by the time they found this out Cal’s dad had been dead for six months and sick for awhile before that so how have they been paying for the mortgage during that time?  Though, I have to say, I’m sure tweens won’t pick up on this tidbit the way I did since they aren’t responsible for paying for a mortgage. :)  I do also wish that there had been more development in the last quarter of the novel, during the beginning of Cal’s time on the run.  All that being said, the ending is the ultimate cliffhanger and the mysteries are in no way wrapped up so I’m interested to see what is going to happen next.

January is just the first of 12 books to be released in the Conspiracy 365 series, one for each month.  This is a new and interesting concept, though I hope the author can keep up the quality with so many books in the series.